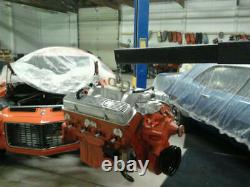 Wieand High Rise Aluminum Intake (Can install GM Winters Z/28 Intake if desired). Brass Freeze plugs during rebuild-Rebuilt. Hot Street/Strip Cam similar to Z/28 Camshaft. Some of the smallblock motors used blocks with an additional 1% tin and an additional 2% nickel added to the cast iron alloy. These very desirable blocks can be identified by looking at the block face under the timing chain cover for "010" and "020". These designators can also sometimes be found on the rear face of the block inside the perimeter of the bellhousing mating surface. This is a very good running small block Chevrolet V8 engine removed from my 1970 Camaro. It is similar to the 1970 LT1 Z/28 Camaro and Corvette engine but feels much more powerful. It is VERY FAST and runs very good whether it is winter or hot summer. You will not be disappointed in this small block, it is one of the best running muscle car engines I have ever had the privilege to drive and enjoy and is extremely reliable. Most motors are hard to tune, have cam or carb or ignition bugs--this one does not. It does have a lopey street /strip performance camshaft in it, but it is very streetable in that power brakes work well with it and it starts right up and runs great at idle, mid throttle, and high RPM. This engine has in it the same type of head used on the 1969 and 1970 Z/28 with the smaller 64cc chamber and high flow runner--these heads are dated 1970.

It is tuned correctly and broken in successfully! I cam make any changes to this engine you may want since I own a full engine shop subject to a price change.

This engine was fully rebuilt, honed and decked, brass freeze plugs and was built for power, performance, and reliability before it was installed in the Camaro! MORE INFORMATION ON THE ENGINE. It has a Weiand aluminum intake on it painted orange to match the Chevy orange block and a very well tuned and reliable Holley dual feed 4-barrel carb List 4777-7 650cfm double pump! You may have this engine turn key including alternator, pulleys, water pump, carburetor, air cleaner, valve covers, spark plug wires, and distributor, fuel log and fuel pressure gauge, oil pan , oil pump, and all engine covers included. I will include even the correct length belts to spin alternator and waterpump, if needed!

Instead of a double hump identification mark, these high performance heads have a trangler identification mark. Although they don't have the double hump, 041 castings have everything else that is desirable in a high performance head. These heads have a 64cc combustion chamber and were originally supplied with either a 1.94 or 2.02 intake valve. However, many times these heads are equipped with a 1.94 in. Valve and so the seats and short-turn radius can be given a super tune-up when cut for 2.02 valves.

The 041's are virtually identical to the 186 double hump casting, except for the fact that the 041 has accessory bolt holes. These heads were a wringer when the "double hump" casting were not legal. I have a set of 041's in my garage right now (along with two set of 462 double hump heads, on set of 481x heads, and one set of 292 turbo heads) waiting for me to build a motor to put them on.

These heads, while not all out race pieces, make for a bad street machine when installed on a properly setup small block. Mortec also lists 041s as 302/350 performance heads. "Right angle" casting identifier, 64cc chamber, accessory holes, good HP head. 041 heads: This head is basically the same head as the 186 head used in the same era.

Back then, Chevy always had two different castings to do the same job just in case a problem was found in either one, so there would be no interruption in production. So, both the 186 and the 041 heads were used in the 69 302 Z28 and the 70 LT1 Z28 and Corvette with 2.02 valves, and also in the SS350. They also were used in the 350hp/350 engines in the Corvettes both years with 2.02 valves. Fan blade and exhaust manifolds are not included regardless of whether turn key option is opted for. Photo of engine is example image of what engine will look like when it ships if one selects the winters LT1 intake option, it is not the actual item.